a fun and exciting experience for all levels of play

The league is open to players ages 5-19 years old. Registration is available for both individual (free agents) AND teams. The eight week season runs January - March with games played on Sundays in Alexandria.

Why Participate in ASA’s Futsal League?

Futsal teaches valuable life lessons both on and off the court. Lessons such as teamwork, perseverance, sportsmanship and how to overcome adversity. Futsal is a fast paced game that leads to lots of goals, fun and enjoyment for all players.

The league is built for players of all skill levels — from recreational or first time futsal players to top Academy and professional players.

active in any weather

The league offers a healthy fitness option during the cold winter months. It allows kids the opportunity to run around in a safe environment at a time when they’re often stuck inside.

The league offers an environment for teams looking for high level futsal competition while still emphasizing good sportsmanship and respect for players, coaches and referees. 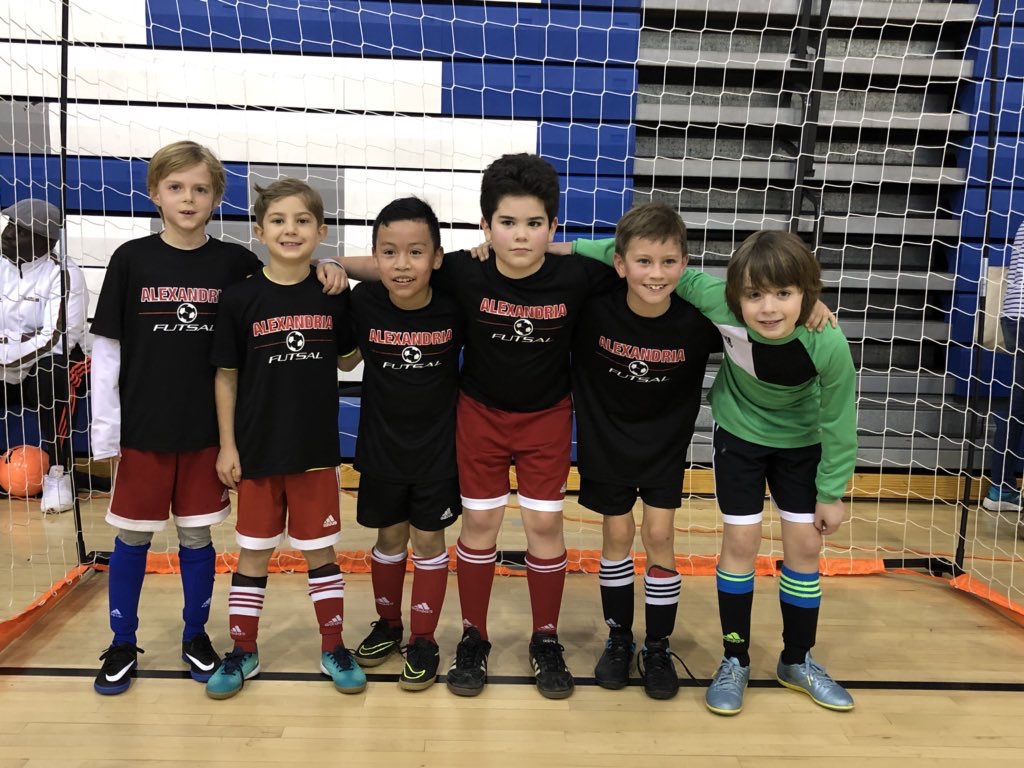 Check-in documents should be submitted via email to [email protected] with the subject line “Winter Futsal League Check-In.”

Documents Needed for Check In

PLEASE NOTE: Alexandria Soccer Association teams who participate in the ASA Rec League, the Academy or Futsal ID programs are only required to submit a Team Roster (step one below) for check-in. Those teams may skip steps two and three.

Team managers should sign the team form above that confirms they have medical release forms for each rostered player OR submit the Individual Player Form for each player.

The Vision of ASA’s Futsal League is to give kids the opportunity to:

Enjoy the game of futsal and its fast-paced play style.

Live a healthy and active lifestyle.

Play in an inclusive league with players from different religions, ethnicities, backgrounds, and creeds.

2019 & 2020 US Futsal Federation National Champions participating in the league

Please note that ASA has a ZERO tolerance policy for any form of referee abuse by players, coaches or fans. Coaches, players and fans should not dispute, contest, or show displeasure with the referee. Ejection of any of these parties for entering the court, violence and/or referee abuse will be handled at the discretion of the league.

What is the structure of the league?

U7+ — 5v5, standings and scores are recorded, futsal rules below

What are the Futsal League Rules?

imilar to basketball. Once a team accrues a 6th foul (in a single half) a direct kick is awarded to the opposing team and the offending team is not allowed to position any players (other than the goalkeeper) between the ball and the goal. For each subsequent foul in a single half (over the allotted five) this process is repeated.

The league reserves the right to combine age groups based on the number of kids registered.The league aims to create appropriate levels of competition for each age group.

The ball is out of play when it has wholly crossed the goal line or touchline; when the game has been stopped by a referee or when the ball hits the ceiling.

For both players and coaches, the minimum penalty for ejection is a sitout of the next match. Maximum penalty is expulsion from the league (at the discretion of League staff).

Failure to Show and Forfeits
A game may not start with fewer than four (4) properly uniformed players on each team for a match.
Once a game has started, it may not continue with fewer than three (3) players on a team.
If a match cannot start or continue due to fewer than the minimum number of players, that team shall forfeit the game.
A team shall have a five (5) minute grace period from the scheduled kick off time before the match is awarded to their opponent as a 5-0 win.
In the event of a delayed start game length may be adjusted by the referee in order to maintain the league schedule.

A league match will consist of a 40 minute game with a running clock, consisting of two 20 minute halves with a 3 minute halftime.

No intentional or unintentional heading of the ball in U9, U10 or U11 age groups. An indirect free kick will be awarded to the opposing team at the spot of the offense.

Restarts in futsal are kick-ins. After the ball has gone out of play the ball is kicked back into play from the touchline and from corners. The ball must be stationary and the feet of the player taking the kick-in must not cross the touchline line. The whole foot can not cross the line.

A kick-off is a way of starting play or restarting play after a goal.
The opponents of the team taking the kick-off must be least 3m from the ball until it is touched
The ball must be stationary on the center mark
The ball is in play when it is kicked (Players can pass the ball backwards on kick-offs)
A team cannot score directly off a kick-off

There is no offside rule in Futsal.

To be taken from the penalty mark on the mid-point of the 6m line. All players must be out of the penalty area, and the players of the opposing team must also be at least 5m from the penalty spot. The kicker is not allowed to touch the ball a second time until it has been touched by another player.

Playoff games must have a winner and will be decided by penalty kicks if tied after regulation. The winner of a coin toss will have the option of choosing to kick first or last.

Each game will have one referee. (Some games may have two referees).

Goals may not be scored directly on restarts, which include:
Kickoffs (start of each half or after a goal is scored)
Kick-ins (from the touchline)
Dropballs

Minimum of 7 players, maximum of 12.
Score Table – One volunteer from the home team is required to manage the score table.

Sliding tackles are not allowed in Futsal. Players are allowed to slide on the court (e.g., to stop a ball from going out of play, to direct a pass towards the net, etc.) For a player sliding to be considered a foul, the slider’s opponent must be in possession of the ball.

Players must enter and leave the court from the designated substitution spot in front of each team bench. “Flying substitutions” allow players to enter and exit at any point during play, however the player exiting the court must fully exit before the substituting player can enter.

Teams sit adjacent to their defensive half. Teams will switch benches at half-time to account for this.

Regarding kick-ins, free kicks, goal clearances and corner kicks, the player in possession of the ball has four seconds to restart play. The referee will count off four seconds using fingers in the air. If play is not restarted within four seconds an indirect kick will be awarded to the opposing team. The goalkeeper is not allowed to control the ball for more than four seconds in his/her own half.

Fewest goals against
Goal differential
Coin flip (winning team has the coin that differentiates itself from the other two. Example: tail, tail, heads = heads win)

Each team is allowed one, one minute timeout per half (two total per game). Only the team in possession can call a timeout and coaches must let the referee know prior to calling for a timeout.

Opposing players are required to stand at least 5 yards from the player kicking the ball for any restart. Players must immediately give 5 yards (and not wait for the referee’s direction).

Uniforms do NOT need to have numbers on the back. If uniform colors between two teams are similar, the designated home team will change colors.

Does ASA organize practices for futsal teams participating in the futsal league?

No. Gym space is limited and we are unable to accommodate practices for all 200+ futsal league teams.

How do I register my child?

How are teams formed?

ASA League Staff do their best to assign Free Agent players to already formed teams of an appropriate competition level. There are instances where a team made up of all Free Agent players will be formed. ASA understands that a team of Free Agents may have not played together before and the players may not know each other. ASA works hard to place these teams appropriately and to provide them extra attention.

Who will coach my child's team?

Unless your team registers with a coach an ASA professional coach will work with your child’s team on game days. ASA tries to keep the same coach with the team but cannot guarantee this. Teams may have a different ASA coach each week.

During the futsal ball mastery program and futsal league, how will players be grouped?

ASA works extremely hard to group players appropriately by skill level to maximize development. (Players can select their level of play when registering for both programs).

Can I get a refund?

Refunds can be provided if the participant withdraws prior to the first game or session. Any other circumstances will be evaluated on a case by case basis.